People’s Embassy of Belarus in Portugal

“How can the Belarusians behave abroad? They should remember that foreigners, looking at him, will judge the entire Belarusian people. So let the Belarusian abroad represent their people with dignity and respect.”

The Belarusian diaspora in Portugal is not numerous. There was no diplomatic representation of the Republic of Belarus in the country, which means that no cultural events or conferences were held, few international communications were carried out. Therefore, until recently, we, the Belarusians of Portugal, were laconic. Until recently, we had no idea that we were walking along the same streets with other beautiful Belarusians. Until recently, we could not imagine that someday we would unite and spread our wings as a mature and successful diaspora …

But the events of summer 2020 have changed us forever.

People’s Embassy of Belarus in Portugal.

In order to defend our votes and dignity, the Belarusians of Portugal have united in an officially registered association. On August 9, we went to Madrid, Spain, in an organized manner to vote in the presidential elections. According to the independent exit poll from Madrid, Sviatlana Tsikhanouskaya won an absolute majority of votes – 91.5%. These votes were criminally stolen by the self-proclaimed president A. Lukashenko.

In this regard, we, the Belarusians of Portugal, announce the creation of the independent People’s Embassy of Belarus in Portugal on the basis of the cultural association Pradmova. Under the auspices of our association, we undertake to represent the interests of the democratic movement of free Belarusians in order to fight for human rights in our homeland; organize cultural and political events in Portugal; create a dialogue between Portuguese and Belarusian societies; cover the events taking place in Belarus in objective and timely manner.

Portuguese Prime Minister Antonio Costa declared his support for democracy and human rights in Belarus and called for dialogue and the release of all illegally detained demonstrators.

The number of Belarusians in Portugal is over 500 people. Among the members of the diaspora there are people of different professions and backgrounds: musicians, journalists, scientists, programmers and many others. Since July 2020, our diaspora has been regularly holding street actions in support of a free Belarus, communicating with media representatives and members of the Portuguese parliament, organizing cultural and educational events. In the near future, the diaspora plans to actively develop and expand such events and create a platform for dialogue between two nations. 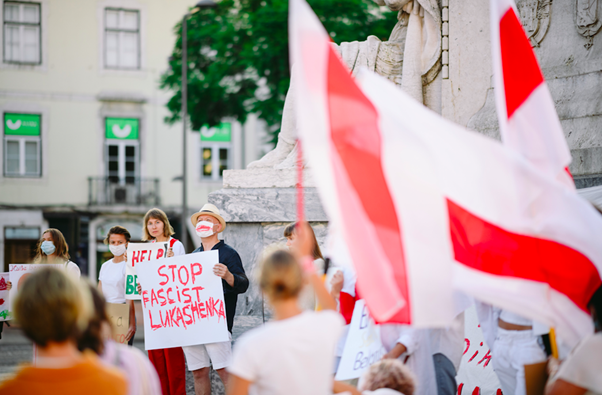